The early repayment charge applied for breaking a fixed rate loan can surprise some customers, but details about the charge, including how it is calculated, must be set out in the loan contract's terms and conditions. 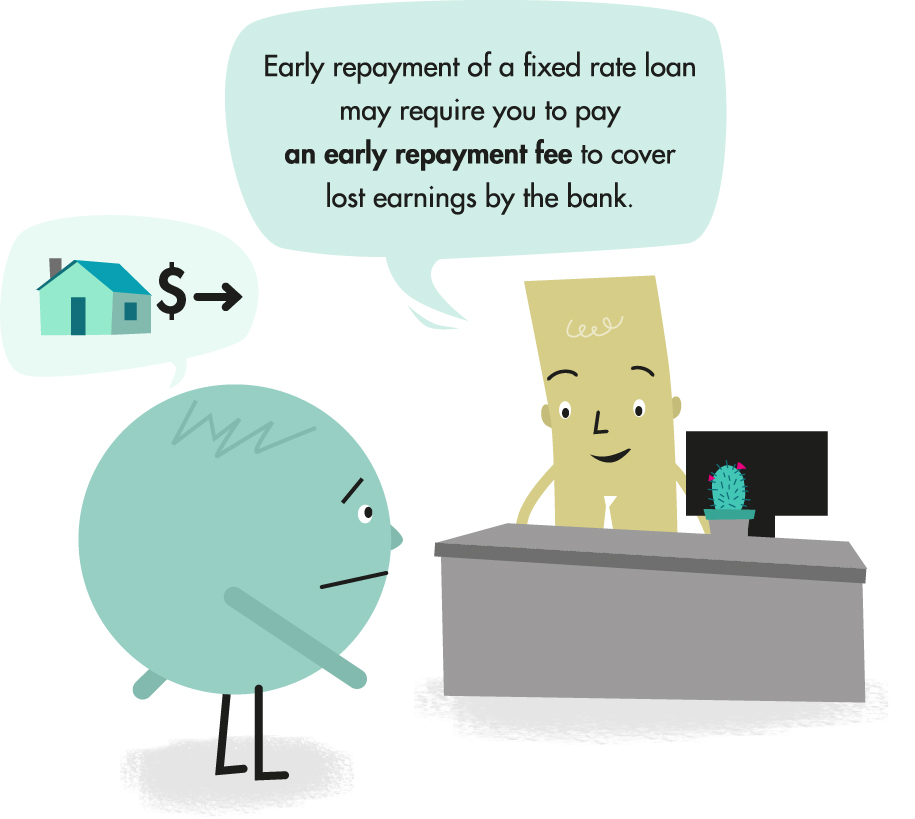 Customers who borrow money at a fixed interest rate for a fixed term enjoy the benefit of knowing exactly what their repayments will be over the period of the loan. They are not affected by any rise or fall in interest rates during that time. In return, banks get a pre-determined return on their money.

But if customers repay their loan early (or make a significant lump sum payment before the end of the term), banks may not be able to lend that money to someone else at the same rate. That’s because interest rates may now be lower than when the loan was taken out.

The Credit Contracts and Consumer Finance Act 2003 regulates early repayment charges on consumer loans. Consumer loans are loans that have been advanced for personal, domestic or household purposes.

The Act allows lenders to recover their costs when a borrower repays a loan early. The Act contains a formula for lenders to use when calculating how much they lost, but it is not compulsory to use this formula (known as a “safe harbour” formula). They can use their own, but their formula must result in a reasonable estimate of how much they lost as a result of early repayment. Lenders must tell borrowers whether they are using the safe harbour formula or their own formula, and they must also explain how they will calculate the charge.

Calculating early repayment charges involves a complex formula. Many – but not all – banks base the charge on the difference between the wholesale interest rate on the loan and the wholesale rate applicable when the loan is repaid early (other factors are also included in the calculation). If rates have risen since the loan was taken out, a charge won’t be applied because the bank can lend the money again at a higher rate.

Banks can’t give prospective borrowers an indication of how much it might cost to break a loan early because the calculation requires two inputs that cannot be known in advance: the point at which the borrower will decide to repay the loan early, and the interest rate applicable at that future point in time. Only with that information can banks calculate any loss and any corresponding charge.

There is nothing preventing borrowers from trying to negotiate a lower charge, but banks are under no obligation to agree. Any reduction is entirely at banks’ discretion. Borrowers should assume banks will apply the charge in full.

Customers are frequently surprised at the size of the charge they face during times of falling interest rates. That surprise often leads them to complain to us. But it is important to remember that an early repayment charge is not a problem in itself – provided the loan contract stipulates that the bank can take such a step if the loan is repaid early.

Complaints we receive include:

Banks will sometimes offer a cash incentive to encourage people to take out a home loan with them rather than with a competitor. If you accept such an incentive but switch to another bank before repaying the loan (or you break the terms of the loan in some way), the bank will often ask you to repay the cash incentive. This is called a claw-back. The bank’s right to seek the return of a cash incentive must be set out in the terms and conditions of your loan agreement (or in a separate contract). Check whether this will be the case before accepting a cash incentive.

Ravi and his partner Hana approached their bank about its fixed home loan rates. They were given the current rates and told they would face an early repayment charge if they broke the term of the contract.

Customer not told break fee valid for days only

Jamie wanted to refinance his home loan with another bank. He had a fixed rate loan and realised he might have to pay an early repayment charge.

Zhang took out three housing loans with his bank. The loans' interest rate was fixed for three years. Four months later, Zhang asked the bank what it would cost to repay the loans early. He was told what the early repayment charges would be. He repeated this request three more times during the next two months. The answers were higher than the first estimate. Zhang eventually refinanced with another bank. The early repayment charges were $5,000 higher than initially quoted.

We receive complaints about banks both refusing to lend and allowing customers to borrow when the customers say they could never have afforded the repayments.

Lending decisions are usually a matter of commercial judgement for banks, something beyond our powers to investigate. We can, however, investigate administrative errors in the lending application process. This includes complaints about a re…

Transfer processYou must apply for a credit card account at the new bank if you don't have one there already. You will be assessed against the bank’s credit criteria. Check your debt before you apply to ensure it includes purchases or payments since your last statement. Note that interest accrued during the current month may not show up.

If the bank approves your application, it will pay off your…

Banks will sometimes lend a customer money only if someone else provides a guarantee. If you agree to be a guarantor for a borrower, the bank can require you to pay the borrower’s debts if he or she defaults on repayments.

Note: The following is intended as a guide only. Seek independent legal advice if you are considering becoming a guarantor. If you are already a guarantor and have any concerns…